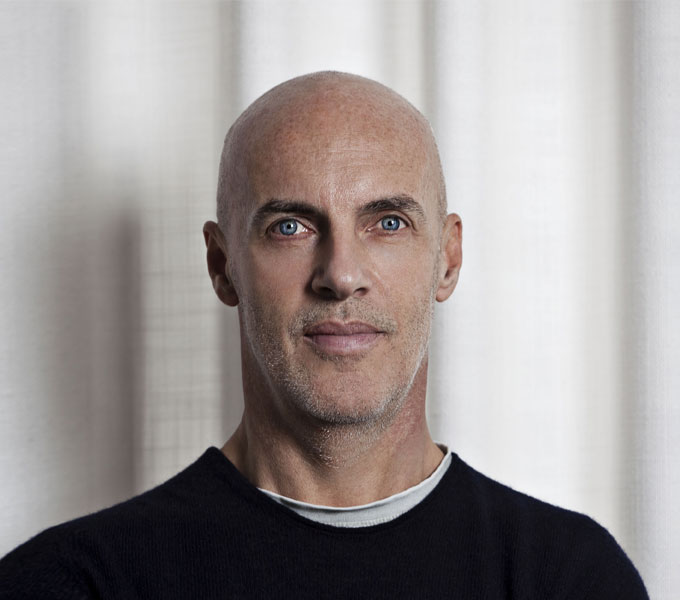 Federico Delrosso, architect and designer from Biella, operates at an international level since 2001, when he established his studio Federico Delrosso Architects in Milan, dedicated towards architecture, interior and product design.
Respecting the natural surroundings, urban context and the spirit of the spaces, intense like the energy and conscious imprint in the memory of spaces, Federico Delrosso conceives projects with a refined lightness characterized with a minimalist and naturalistic approach.

The homogeneity of materials, often left natural and raw, and the study of light, sensed as an emotional and tangible component of each project, represents the essential elements of his stylistic research and the very idea of architecture. The latter is in fact conceived as a "self-seeking soul in every detail of light and shade to reach the delicate balance that makes it independent of those who created it, lives it or will live it."
In the field of furniture and lighting design, many important collaborations were made with brands like Davide Groppi and HenryTimi. Wall Lamp Mima designed for Davide Groppi, was commended for the 21st Compasso d’Oro 2008 and joined as a permanent collection of the ADI (Association for the industrial design). Furthermore, floor lamp  Hashi, designed also for Davide Groppi, got selected for the ADI 2019 and is competing for the Compasso d’Oro 2020. Hashi also won the Eccellenze della Lombardia 2019 award.

In the year 2012, restaurant design project Notime in Montecarlo was among the finalists of the Best of Year Award, organized by the Interior Design magazine (USA). A similar acknowledgment was received in 2016 for the kitchen category for the project Trapezio Kitchen, along with numerous other product-related mentions. Speaker in Russia, Mexico, Dubai, Ecuador, China, Turkey, in 2014 he was also invited at the Biennal of Architecture in Moscow to give lecture on the topic ‘Light and Architecture’ and was nominated as a member of the Presidential Committee for the IIDA (International interior design association) of Chicago.

Various publications has been made in National and International magazines such as Elle Decor, Interni, Interior Design, Wallpaper and in the year 2013 his first monograph Pushing the Boundaries (Skira), which presented a selection of projects realized in twenty years of Delrosso’s career, was published. The passion for building together with a constant search for overcoming theoretical and practical limits lead him to conceive Slim35mm flooring for Tabu and Marmocode, an innovative assembly of the scraps made from the marble processing, with which he designed a collection of table accessories fd802 for HenryTimi.

Eclectic architect with a multidisciplinary approach, he participated in the Dining By Design event in New York displaying the installation Dining Tank and also realized Purifying Walk, an installation for DepurArt Lab Gallery that joined the permanent collection at the Acqua Franca Museum in Milan. In 2016, at the XXI International Exhibition of the Triennale of Milan- Design After Design, he presented his personal exhibition Residual Spaces. In the context of Biennale di Architettura 2018- Time Space Existence, an exhibition by GAA Foundation hosted by European Cultural Centre, he presented the architectural installation Work in Progress. Officially selected at the Milano Design Film Festival 2018, Dreaming the Real, a film directed by Luca De Santis and curated by Davide Giannella, narrated the one and a half year journey around the visions and imaginations, developed by Federico Delrosso in his twenty year career, through the images from the work site of Teca House.