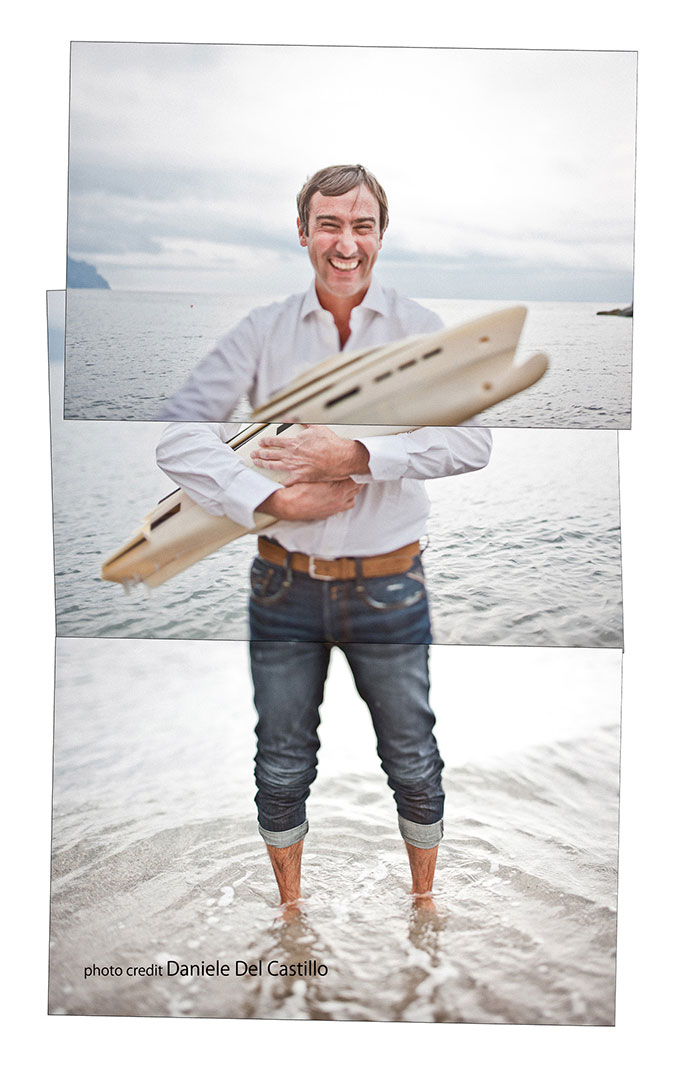 Stefano Pastrovich began his quest in 1973, the year he was born. Because exploring horizons comes naturally to Genoa’s citizens, suspended like their city, between sea and sky. Water and air have always been the elements with and within which Stefano Pastrovich has expressed his innate need to explore the future.

Even his first holidays at sea were formative experiences, crossing the Strait of Bonifacio between Sardinia and Corsica with the Pastrovich family aboard a Zodiac Tender 3.5 meters long, powered by a 25 hp engine. Stefano was still too young to speak, but his subconscious, his eyes, mind and soul received the imprinting that would later drive the inspiration for innovative and sometimes revolutionary projects. Projects that initially looked to the sky. As a boy, he built gliders that he designed himself.

His talent was to consider essential the link between design, build and test his ideas. The air and the water were obvious his elements. Yet, at some point, making ultralights fly was no longer enough. He wanted to take to the air himself. So, as soon as he turned eighteen, he left for San Francisco, where he obtained a private pilot’s license. His experience in the USA opened new perspectives, emphasizing the idea that life could have take him very far if he wanted. He enrolled in the Faculty of Architecture at the University of Genoa and then moved to Seville, Spain to continue his studies.

Returning to his city, he defended his thesis and graduated with honours only to leave again. It was at this point that Stefano’s explorations shifted towards the top international naval design studios. The right proposal came from Sophia Antipolis near Nice, France, with a call from the Studio of the renowned English superyacht designer Martin Francis.

The year was 1997. Meanwhile, at the same time that his career as an Architect and naval designer took off, his passion for flight kindled an interest in gliders and then power aerobatics that would take him to win prestigious international awards from 1998 to 2019. Stefano’s first mission, at the age of 24, was to help Martin Francis design SenseS, a 57 metre superyacht commissioned by Jack Setton and built in the Kusch Yacht Agentur shipyards in Bremen under the direction of Claus Kusch. The meeting with Claus Kusch proved to be pivotal for Stefano Pastrovich.

The German entrepreneur commissioned the Italian architect to design a yacht similar to SenseS, but bigger and more majestic. The design of this 104-metre superyacht, Le Grand Bleu, came to fruition in the mind of Stefano Pastrovich in 1998. But Kusch wanted a "Mercedes" from him and the architect therefore needed to divide his working week between the French Riviera and Bremen, where the Vulkan shipyard is located. Le Grand Bleu was an important step in Pastrovich's career. The right opportunity came in 2000.

The success of his sailing boats, Luca Bassani, founder of Wally, decided to take on the world of motor yachts. Stefano Pastrovich was commissioned to develop the design and construction details for the 118 WallyPower, a full-on revolutionary boat that tore up the rulebook of traditional values. It soon became a cult object to the point of appearing in the film The Island (2005) by Michael Bay, starring Ewan McGregor, Scarlett Johansson and Sean Bean. Stefano Pastrovich went on to design the entire range of motor yachts with Luca Bassani, including the 47’, 55’, 64’ and 73’ WallyPower. These are boats you either love or hate, but to which you can never be indifferent, each a benchmark in a class of its own.

At this peak, Pastrovich felt it was time to turn the page. The first part of his career had been a quest to push the frontiers of the Italian aesthetics and the German construction. But now the Italian architect entered a more mature phase, wanting to design according to his own philosophy, meeting specific needs and fulfilling special dreams. Or in other words: “solving problems”, as Mr. Wolf in Pulp Fiction would say.

Between 2006 and 2007, Stefano Pastrovich started to promote his own ideas creating the interior and exterior designs of the Sly 42’ Fun for the shipyard Sly Yachts, as well as the interiors for the Shipman 63’ LunnaA, introducing in his office the extensive use of the 3Dimensional cad drawings in order to reduce the design time and mistakes during the designer-builder transmission of information, thus extending his design versatility to two elegant, high-performance sailing yachts. Another prestigious order followed in 2008. Eric Schmidt, then CEO of Google, commissioned the conversion and refitting of an 83-metre German government ship to create the Schmidt Ocean Institute’s scientific research vessel Falkor.

Central to the success of this project was the intensive research Stefano undertook to better design the general arrangement and on-board operations. This included work on a research ship off Costa Rica, even taking part in some missions of the ship’s submarine. The innovative design solutions and attention to detail of the Falkor conversion soon earned it the status of a textbook example.

This contributed substantially to Pastrovich's increasing reputation, especially with the 2008 financial crisis forcing the market to find alternative approaches to the construction of luxury superyachts from scratch. Stefano Pastrovich then embarked on what can be called his Conference Phase (2010-2012), working on a series of case studies that further enhanced his reputation, from Mystere Shadow and Life Saga to Uncuffed. Each is a completely different project. 50m Mystere Shadow is the conversion, or rather transformation, of a ship built to stow mud into a floating games room, floating island disco and floating resort. 42m Life Saga is a super luxury yacht. 20m Uncuffed, on the other hand, is the first boat designed as an open space, a day sailer where Stefano experimented a diagonal structure to reduce costs and weight.

It is the answer to a currently-unexpressed market demand anticipated by the architect, a boat to experience the sea during the day. The superyacht world now knows Stefano Pastrovich's way of thinking. With this credibility and experience, Pastrovich transferred his Studio to the Principality of Monaco in 2011. The aim was to take the yachting sector further, to create relationships that stimulate the studio’s design work to evolve.

That same year, commissions arrived to design all the interiors and exteriors of two 71,5-meter vessels for a high-ranking Qatar figure. The two vessels are the first case of where Stefano was able to experiment his idea that a combination between a commercial platform and a luxury detailing in both the exterior and interior, could result into a cost saving while keeping an exceptional reliability and aesthetical originality. The two vessels were built in Qatar in a partnership between Damen shipyard Holland, and Nakilat (Royal family Qatar).